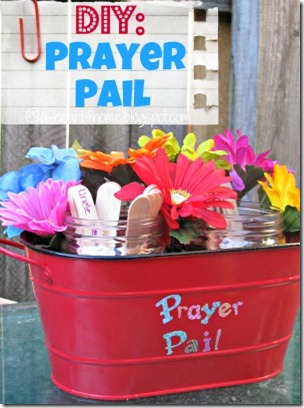 I pinned the idea of a family prayer pail last month. I knew this idea would be a great addition to our dinner prayer time and would encourage our children (as well ourselves) to pray for more than just the food in front of us.

At first I simply wrote names out on large craft sticks and placed them inside of an old peanut butter jar. Then this past week I took some time to pretty it up a bit.

I used all items we had around the house so our prayer pail centerpiece ended up being a “free” project.

We decided that we wanted to deviate from the original idea a little to include a jar for the sticks we’ve already prayed for, so we could pray for all the people/groups before recycling back through. However, you could easily use this same idea to make a one jar prayer pail. 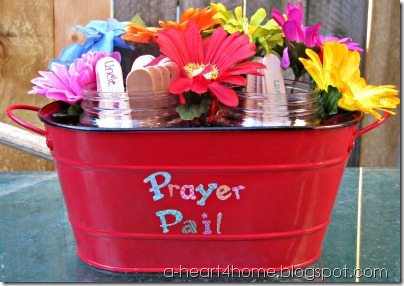 Materials
1. Simply write the names of people, countries, groups and ministries you’d like to pray for on the craft sticks with the permanent markers.
2. Use the stickers to write Prayer Pail on the outside of the pail. This is easier to do now than when the pail is filled (ask how I know).
3. Place the two jars into the pail and pour the beans around the outside of the jars to hold them in place.
4. Arrange the artificial flowers in the beans.
5. Place the prayer sticks into the jar on the left. (Once you’ve picked a stick and prayed for the person named on the stick you’ll move that stick to the jar on the right.) 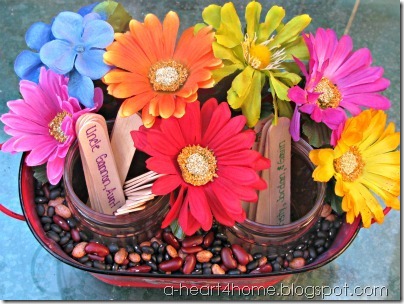 At dinnertime we each draw a “prayer stick” (right down to our two year old) and pray for who or what is written on the stick. Our four year old thinks of her own prayer, but our 3 year old and two year old repeat either Tim or me as we pray for who or what is written on their stick. Tim and I also draw our own sticks.
Our children love the prayer pail and have been excited about drawing sticks and praying for different people. Tim and I love that we’ve found another way to encourage our children to build a personal relationship with God and to help them to focus on gratitude and the needs of others.
Today’s Questions: What do you think about the idea of a family prayer pail? Do you think your family would benefit from one? Do you have other ways that you make prayer a priority in your home?