I didn’t know when we stopped by my parents house last week that we’d end up having so much fun with the kids across the street. No, not the human variety, but the four-legged, furry version with little horns.

My parents’ neighbors have a miniature farmyard within city limits. Occupying this farm are chickens, dogs, llamas, a horse, and goats. When I say goats, I mean a lot of goats.

A few months ago a neighboring goat got into the neighbors fence and managed to get all three of the female goats pregnant! So now instead of 6 goats, my parents’ neighbors have 15 goats! One goat had twins, one had triplets, and one had quadruplets. The poor neighbors had to deliver all 9 babies within a few days of each other. I don’t think they slept all that week.

All the kids are now doing well. It’s so much fun to watch them playing with eachother. Even so, Emahry wasn’t content with watching, she wanted to play, too. Good thing she was still wearing her gardening clothes and I had remembered to put the camera in the van.

Emahry “snapping” her fingers and calling the goats. 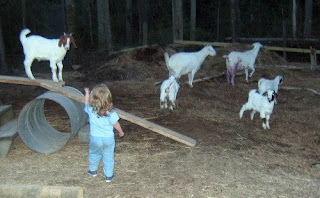 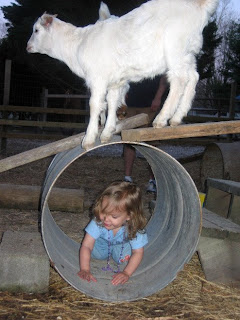 “Look at the camera.” 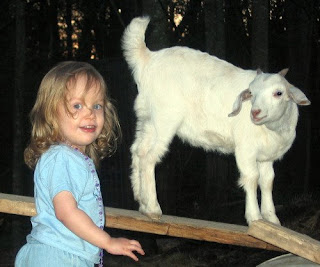 Hoping for a Nibble 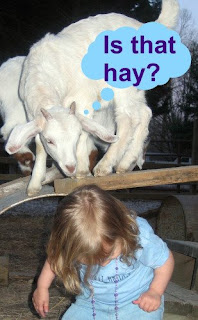 Emahry wasn’t scared at all, she just pushed the goat away 🙂

and one more, because they are just so cute. 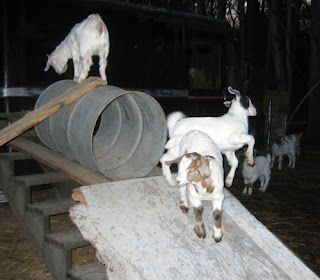 The neighbors have offered to give us some of the goats when they’ve been weaned. If we had the fencing ready I’m sure we’d be taking a couple, but most likely we’ll have to wait until next year to start our own “farmyard.” (Well, unless we can find some free fencing ~ Any ideas?)

What type of pets do you have in your home? Would you ever want farm animals? Why or why not? We’d love to read your opinions and experiences.