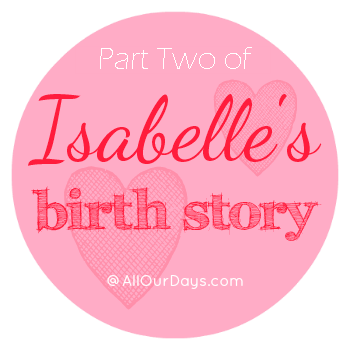 Be sure to catch up with Part 1.

As Tim and I drove to the hospital, I closed my eyes and tried to relax. I really wanted to fall asleep for a few minutes, but felt too excited and nervous for that to happen. I continued to pray that labor would soon begin.

I was not to be disappointed and at 4:46am, just a few minutes into our drive, I experienced my first contraction. It was surprisingly long and strong. While I was a little nervous about the intensity, the relief of labor actually beginning overshadowed my fear. Like clockwork, fifteen minutes later another strong contraction hit. A third contraction fifteen minutes after that sealed the thought that active labor had begun.

We decided to eat an early breakfast before heading to the hospital and stopped off at McDonald’s since it was one of the only places open that early in the morning. I managed to get down a go-gurt and Tim enjoyed his breakfast sandwiches as well as the one I had ordered 🙂

We arrived at the hospital shortly after my third contraction (around 5:20am). Tim dropped me off at the entrance and then went to park while I walked into the ER to get registered. As soon as I got to the desk another contraction hit. By the time I finished registering and Tim arrived with all of our laboring things I had experiences two more contractions, now only 5 minutes apart.

A transporter arrived to guide us to the birthing center and in the short walk another contraction hit.

Within a few minutes we were settled into a triage room (the same one Jonathan was born in) and I was hooked up to be monitored. At this point I was only 5 cm dilated. I was a little disappointed by this number as contractions were already really strong and I wasn’t sure I could make it through hours of contractions of this intensity.

My first contraction laying in the hospital bed caused Isabelle’s heart rate to plummet so quickly that our nurse, Brooke had me roll to my left side and then to my hands and knees to stabilize the baby’s heart beat. This was definitely a scare and I vividly remember asking Tim if they needed to just get the baby out now.

Thankfully, after further investigation, Brooke discovered that the monitor simply wasn’t picking up the heartbeat because Isabelle was much lower than expected.

After about 20 minutes and several contractions (now only 3 minutes apart) we made our way down the hall to our room (the same one Amelia was born in), Tim going back a forth a couple of times to carry everything and me gladly accepting a ride in a wheelchair.

I’d love to hear about your labors. Also, any guesses for how long it took us to name Isabelle after she was born?