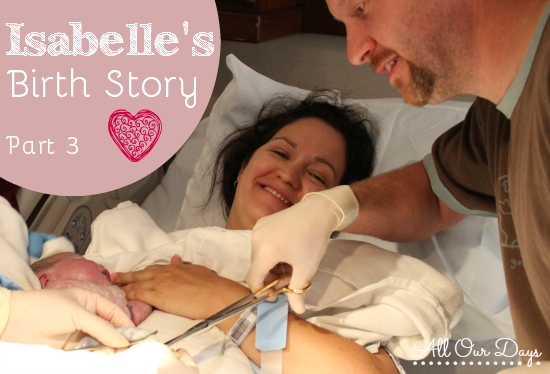 A Baby is Born Within the Hour

When we arrived in the labor, delivery, and recovery room it was a little after 6 AM. The doctor on call, a young female OB came in to check my progress shortly after we settled in. I was thrilled to hear I was fully dilated with a tiny cervical lip which she was sure would disappear as soon as I started pushing.

I could hardly believe I had dilated 5 cm since arriving at the hospital only 30 minutes earlier!

The doctor quickly decided the midwife would need to be called in earlier than her 8 AM timeframe. A few minutes later, a nurse came in to tell us that Kim was going to take a quick shower and then she’d be right in.

At this point I was still hooked up to monitors and breathing through contractions while lying on the bed. Surprisingly, I was able to stay on top of the contractions by simply breathing in through my nose, blowing out my exhale and focusing on relaxing my entire body. However, I couldn’t control the awful shaking of my legs. I’ve experienced “the shakes” after delivery, but never during labor and found the shaking very annoying.

The nurses kindly lowered the lights as my normal laboring music played quietly in the background. As the nurses set up the room for delivery they commented on how much they liked the Hidden in my Heart CD.

As the contractions started coming closer and closer I gave up opening my eyes between them. Tim sat by my side, holding my hand and stroking my forehead. This helped me focus and I found the rhythmic movement comforting.

After laboring quietly for a few minutes I asked our nurse, Brooke if I could get up to use the bathroom. Unfortunately, she said she’d rather me wait because she was afraid if I pushed at all the baby might be born before Kim arrived.

Thankfully, Kim arrived around 6:40. Her calming voice and demeanor added to the calm in the room.

Within 10 minutes I felt like I couldn’t handle much more. Even at the time I was glad to remember that I always think that during transition.

In between contractions our new nurse arrived. It was Dawn, the nurse we had when I delivered Lillian last summer. She smiled and said, “I thought I remembered your name.”

I felt the tiniest urge to push at the end of my next contraction. I told Tim and he put on his gloves and moved closer to the foot of the bed while Kim told him she would check for the cord and then move out of his way so he could catch the baby.

Kim asked Tim if he was right or left handed and determined that he’d probably be better on her side of the bed. I told her it didn’t matter–he’d had enough practice to catch the baby from any side 🙂

With Brooke and Dawn by my head and side and Kim and Tim ready to receive the baby I got to work pushing her out.

Within a few contractions (and only about 5 minutes), Isabelle was born into her daddy’s hands at 6:52 AM. She was completely quiet as she took in her new surroundings which worried me at first, but she was nice and pink so no one was really concerned.

The nurses quickly helped me unsnap the hospital gown and Tim placed Isabelle skin-to-skin on my chest. Dawn covered us with a warmed blanket and Brooke used the bulb syringe on Isabelle since she was a bit raspy from being born so quickly. Kim and the nurses joked that I made labor and delivery look easy as we all admired our beautiful new baby girl.

Isabelle still didn’t have a first name at this point, but I told everyone her middle name was Joan which means “God is gracious.”

(Boy, was he ever! My labor with Isabelle was only two hours from the time of my first contraction until the time she was born. Also, I was able to handle the pain of labor while lying on a bed, which is something I’ve never done before. Another sign of God’s grace was the arrival of Kim and Dawn at the very end. There’s nothing quite as encouraging as hearing the nurse from your previous delivery telling everyone how amazing that birth was right as you feel you can’t go on much longer. God’s hand was definitely upon us and even in the midst of the pain I was so glad to know that people were praying for our little girl, for me, and for our entire family.)

As Kim waited for the placenta and the nurses cleaned up the bed and room, Tim and I thanked God for our newest blessing and admired our beautiful baby and the beautiful sunrise outside of the room’s huge window.

Within a few minutes, the cord stopped pulsing so it was clamped and Tim cut it. I also delivered the placenta and Kim checked me for any tears. Thankfully, there were none (although later I did discover a small abrasion).

I felt amazing after Isabelle’s birth and noticed immediately that my feet were much less swollen than they had been in weeks.

After spending some time with Isabelle and calling family to announce the birth, Tim quickly fell asleep on the window seat/spare bed. I, however, was filled with adrenaline, ordered a huge breakfast, and didn’t sleep until well after dark that night.

Isabelle nursed wonderfully from the start, but after sleeping for the majority of the first day, was up off and on all night. Finally, I was able to fall asleep while lying on my side and nursing her.

As a side note, Isabelle didn’t have a first name for the first 6 hours of her life. We went to the hospital with a few choices and I continued to mull them over while Tim had quite a long nap. After getting online and looking up the names’ meanings again we decided on Isabelle. 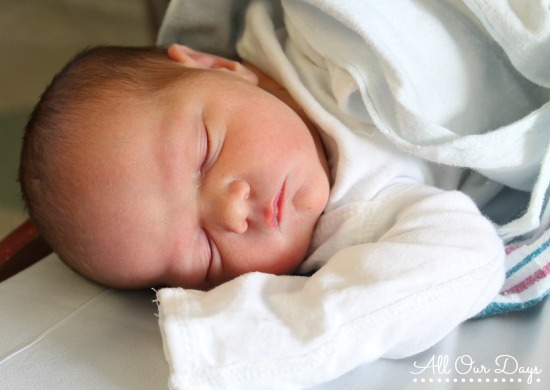 Isabelle ~ “God is my oath”

Please, tell me I’m not the only one who thinks babies look cute when they cry…

Thank you all for your thoughts and prayers during my labor and delivery and in the coming weeks as we continue to adjust to being a family of eight.