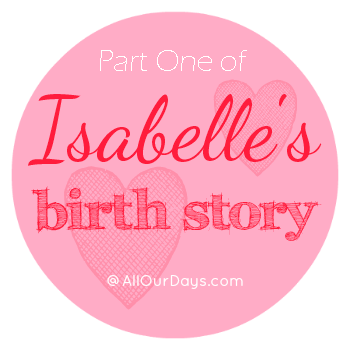 Labor Starts in an All-Too-Familiar (and slightly scary) Way

On Saturday night, Tim, the kids and I joined my parents and sister at their house for dinner. I was feeling fine (other than being very huge) and enjoyed eating some of the most delicious barbecued ribs I’ve ever tasted.

On the way home I started thinking I had eaten too much as my stomach began to feel uncomfortable.

As soon as we were home, Tim and I worked together to get the kids to bed. I went to bed soon after around 9:30 PM.

I woke up off and on starting around midnight. At 3:18 AM I woke up to roll over. As I did, my water broke and gushed all over the bed. Thankfully, we always keep a waterproof cover on our mattress.

I woke Tim and told him what had happened. He quickly told Jonathan to go back to bed (he had crawled into our bed at some point during the night) and sent Eliya to the couch (she had made her way to the floor in our room). Then Tim brought me some towels as he started pulling the linens off of the bed.

As I moved to the bathroom, Tim put the sheets in the wash, started the laundry, and remade the bed for my parents who would be coming to watch the kids.

I got cleaned up and changed, trying hard not to worry about my water breaking before contractions. The only other labor where my water broke before labor began was my first labor with our daughter, Emahry.

My labor with Emahry was the hardest by far at 27 hours total and almost 24 hours of contractions 2-4 minutes apart. (You can read Emahry’s birth story here.)

As I tried not to worry about this labor repeating the difficulty I experienced with my first, I set to work mixing up a large batch of goat’s milk formula for Lillian and Tim called the hospital to tell them we’d soon be making the 45 minute drive. Tim also called my sister who woke my parents.

It just so happens that from 8pm Saturday night until 8am Sunday morning is the only time one of our midwives is not on call. While Kim, the midwife scheduled for Sunday, had assured me she would come in early, the hospital didn’t want to call her in before her 8 AM shift if it wasn’t necessary.

I finished getting a few things packed and posted our status on Facebook and here on the blog while Tim loaded everything into the new-to-us Suburban. As I made sure we had everything we would need I prayed that my contractions would begin soon on their own and that I would be able to deal with whatever labor would bring.

Around 4:15 AM, my parents arrived and after a brief prayer together, Tim and I began our drive to the hospital.

How did labor begin for you? Did your water break first? Did you start out with contractions 20 minutes apart? Were you thrown quickly into intense contraction? Every labor is unique, so tell us about yours.