If you’re just joining in, you can read Part 1 and Part 2 of Emahry’s Birth Story before continuing with Part 3.

After we arrived at the birthing center, my contractions continued every 2-3 minutes like clock work. By this point each contraction was lasting about 1 1/2 minutes so there was very little break between them.

The only relief I got was when I laid submerged in the tub. I got into the tub every couple of hours to “ease” the pain of the contractions, but unfortunately my contractions also slowed when I was in the tub, so I wasn’t able to spend as much time in the tub as I would have liked. Thankfully, I was able to get at least a few minutes of sleep between contractions while I laid in the tub since I had been up since midnight.

Throughout my seemingly endless labor, Tim was everything I could have hoped for. He encouraged me and at times, quite literally, held me up. He also got quite a workout massaging my lower back which bore the brunt of each contraction.

Finally, by 1 AM, May 10th, I was fully dilated. At this point I had been having contractions no less than 6 minutes apart and 1 to 1 1/2 minutes in length for 21 hours.

However, although my body was technically ready to have Emahry, my contractions suddenly spread out to one one every 10 to 15 minutes. By 4 AM, 24 hours after my contractions had begun, we were told that I would need to travel to the hospital to be induced.

Needless to say, I was crushed. Our plan was to have a completely natural birth at the birthing center and now I would need to walk to the car and travel to the hospital to be hooked up to an I.V. for an induced labor. It seemed like such a slap in the face after 24 hours of strong contractions. Tim continued to be a pillar for me and reminded me that the important thing was for our baby to be born safely. Even though I knew he was right a small part of me still felt as though I had failed. (Not, that it’s a failure to have children with medication, it just wasn’t what I had planned.)

We arrived at the hospital around 5 AM and the nurse inserted my I.V. and began the Pitocin to induce my labor. By 6 AM I began feeling an urge to push. After a few unsuccessful pushing attempts, I figured out what I was suppose to do. The midwife arrived in our room just in time, with one more push Emahry’s head emerged. The cord was wrapped around her neck, so the midwife uncoiled it and with one final push, Emahry slid into her Daddy’s hands. It was 6:33 AM on May 10th, 2007, a full 27 hours after my water had broken. Even with the Pitocin, I had been able to avoid pain medications, which was a personal goal for my labor.

The midwife then helped Tim place our beautiful baby girl into my arms.

We were immediately startled by a large bump on the side of Emahry’s head, however it was gone within a few hours. A specialist said it was probably just a fluid sac that appeared because of her placement in the birth canal and the length of the labor.

Emahry weighed 7 pounds exactly and was 20 inches long. Her face was such a beautiful sight to see after nine months of waiting. We just held her and starred in amazement at the wonderful gift God had given us. She spend the whole day in our arms and even that night, when the nurse asked to take her to the nursery, we refused. Instead, Emahry spent her first night laying on my chest as I battled with some serious insomnia. 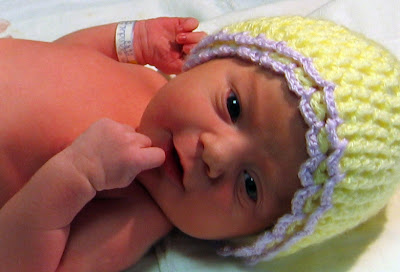 Even though my labor with Emahry was definitely far from my notion of an “ideal” labor, I do feel a sense of satisfaction, knowing that I was able to bring our baby safely into the world. It’s also nice to know, even though I hope I don’t have to again, that I can naturally withstand over 24 hours of strong contractions. Of course, Emahry’s long labor and delivery gave me the false assumption that my next labor would also be somewhat long. This naive thought and the long drive to the hospital almost combined into a roadside birth when our son Jonathan was born 4 weeks early in September.

Here are some photos of Emahry at 2 weeks old. 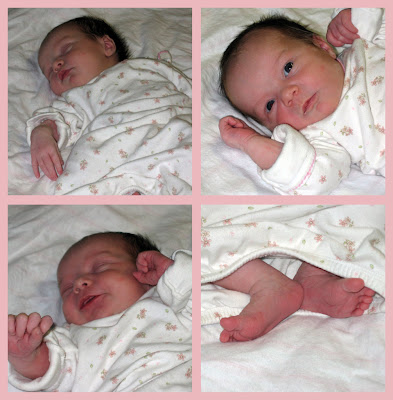 Just a friendly reminder that the outdoors is not

Spending some quality 1 on 1 time with this amazin

I'm still trying to figure out how to navigate our

Tim's been home for two weeks now and we've been h

Are you spending more time at home with your kids

This is just too funny not to share! . Three count

I'm starting another book I feel I should have rea

Our kids are growing up so quickly! The days fly b