(You may want to read Part 1 and Part 2 before continuing.)
While our midwife Addie and nurse Rachel both thought I was too relaxed to be in labor, the fact that I was already 7 cm dilated and having contractions 4 to 5 minutes apart for 1 to 1 1/2 minutes each easily proved my case.
Over the next few hours my contractions became even stronger and closer together. By this point I was still walking around between contractions but leaning on Tim each time one hit. I also spent some time rocking on a birthing ball and in the tub.
Again with this labor, every time I got into the tub my contractions would slow down. On one hand this gave me some time to rest, but on the other it meant that I wasn’t progressing as much as I could have if I was not in the tub.
In the end, I gave up on the rest aspect and decided I was done with the tub. The simple fact of getting out of the tub and trying to dry off and redress without shivering to death all while having several hard contractions sealed the deal for me. (We’ll see if the tub is a friend or a foe in this next labor. Personally, I’m praying I don’t even have time to find out.)
Tim was again a great coach and helped me remember to eat when I could and stay hydrated. After one of my frequent trips to the bathroom I prepared to return to my position sitting on the birthing ball, but as soon as  the next contraction hit I jumped up saying that it felt like I was sitting on the baby.
Addie said she’d like to check my progress so I slid onto the bed and was greatly relieved when she announced that I was fully dilated and that the only thing that appeared to be holding the baby back was the bag of water. She asked if I’d like to leave it intact or have her break it. Tim and I decided to have her break it. After the third attempt, my water finally broke and at least for a minute I felt a tremendous sense of relief.
Now I just had to wait for the urge to push. This may sound crazy, but I love when I finally get the urge to push. With all of my labors so far, the pushing is definitely the easiest part of the whole process. It also helps to know that it is all almost over.
I spent the next half hour or so kneeling on the bed with my chest, arms, and head resting on the birthing ball as Eliya moved into the perfect position. Around 8:30 AM I asked Tim to start praying that I would get the urge to push. Within ten minutes it came.
Addie told me I could push right where I was if I didn’t want to change positions. With my next contraction I tried to push still kneeling on the bed, but I immediately felt like I didn’t have enough control and flipped to my back in the middle of a push!
At this point, Rachel, our nurse stepped out to answer another midwife’s question. With the next contraction Eliya’s head was out. Rachel rushed back in saying she didn’t think it would be that fast. As Addie unwound the cord from Eliya’s neck (all of our babies have been born with the cord around their necks) Tim moved into position at the foot of the bed to catch Eliya. He barely made it before the next contraction hit sending Eliya sliding out into his hands. It was 8:45 AM.
Within seconds Tim had placed our newest blessing on my chest. She was absolutely covered in vernix so Tim called her our little cheese ball. Here she is after being cleaned up a little.
After a couple of minutes spent getting some meconium off of both Eliya and me, Eliya began to nurse contentedly. Other than when Rachel cleaned her up a bit and gave her a once over Eliya spent the next several hours just hanging out in bed with Tim and I.
I was able to take a relaxing shower minus little heads trying to peak through the curtain and Tim and I enjoyed a large lunch together in our room. By 3 PM we were ready to head home.
As I walked through our front door I was greeted by my sister, but Emahry and Jonathan had absolutely no interest in me and went straight to Eliya. It was nice to be home again (and less than 12 hours after leaving for the birthing center). But the best part was our entire family being together for the first time. 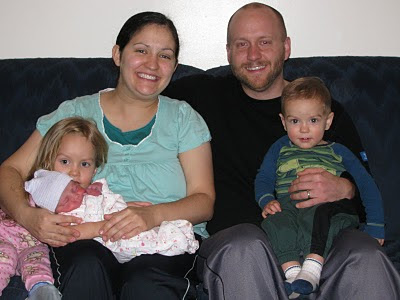 Thankfully, after Eliya’s birth I felt absolutely fantastic, very similar to how I felt after Jonathan was born. In fact, I had committed to making dinner for one of our neighbors who had just had a baby two weeks earlier and I had plenty of energy to cook dinner for my family as well as hers that evening.

You can also read the rest of our birth stories. It’s amazing how they are all so different!