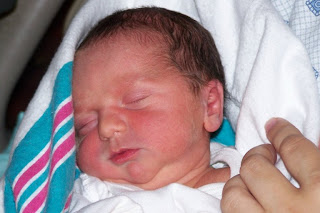 Jonathan was born on September 23rd at 3:54 PM. He arrived 4 weeks early and was only 4 pounds 14 ounces when he was born. He is 18 1/2 inches long.
This time around my labor was very quick, only about 2 hours of hard contractions 2-4 minutes apart. What a change from Emahry’s birth, 27 hours total with 25 hours of contractions 2-4 minutes apart.
Jonathan’s quick entrance and our 45 minute drive to the hospital almost combined for a roadside birth. Thankfully we pulled up to the entrance as his head began to crown. Tim wheeled me to the birthing center and we were rushed into a triage room at 3:45. Nine minutes later Jonathan was born. Our midwife didn’t make it to the hospital in time, so a doctor who was giving a tour of the facilities actually handled the birth. The cord was around Jonathan’s neck, so the doctor quickly clamped it and Tim cut it. Then Tim caught the new baby and handed him to me. I think it takes more time for us to tell the story than it did for it to actually happen.
A few minutes later, we were wheeled into our room. Jonathan’s breathing was a little fast, so the nurses began to monitor him. He also had some trouble keeping his body temperature up, no surprise since he has so little fat. He ended up needing an IV for fluids to help get his sugar levels up. He also had to be under a heating lamp for a few hours. Other than that, he was completely healthy, just very, very small.
After a few hours in the nursery, he was brought back to our room to nurse and spend the night with us. His IV was removed around 3 AM. He stayed with us for the rest of our time in the hospital.
We’re now back home and Jonathan is doing great. He is very slightly jaundice, so he’s wrapped up in a blue light blanket. This is mostly just a precautionary measure since he is so small. His levels have already dropped, so hopefully we’ll just have to deal with this for a few more days.

Here are some photos of the “little guy.” I’m sure there will be many more to come. 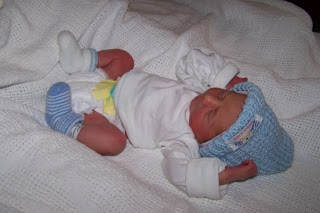 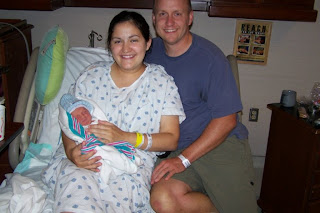 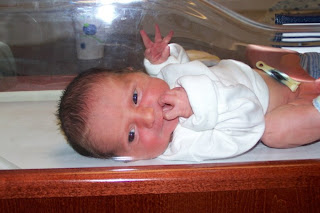 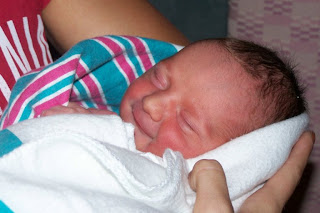