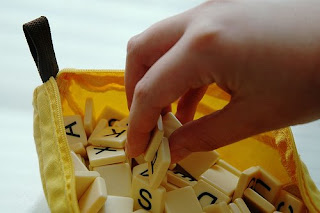 Summary: The point is to build a crossword puzzle with your tiles. It is very much like Scrabble, except you don’t need a board; simultaneously, but independently, each player builds their OWN crossword, alongside the other players.

When unzipped there are 144 banana-colored letter tiles waiting to be played.
I have a deep and abiding love for letter tiles, if you haven’t noticed already.
My family? They don’t get it.Silly humans.
The game is easy enough to play.

Dump out all the letter tiles and turn over any tiles with letters facing up.

Each player pulls 21 tiles from the main “bunch”.
Don’t you just love all the banana terminology?
I tend to be picky – drawing one tile here, another tile there; making sure to draw all over the “bunch”. The girls think I’m a loon and pull theirs out from one side.
I inform them they are unimaginative.
They inform me I’m weird.
We’re all so supportive here in OMSHville.

Once everyone has 21 tiles one player will say “SPLIT!” and all players then turn
their tiles over and begin playing.

The point is to build a crossword puzzle with your tiles. It is very much like Scrabble, except you don’t need a board; simultaneously, but independently, each player builds their OWN crossword, alongside the other players.

Once a player uses all 21 of their initial tiles, they yell “PEEL!” and grab a new tile from the “bunch” of unused tiles. All other players also have to grab an additional tile. Sometimes this is a relief – like when all you have are the consonants X, Y, or Q, but other times it’s a real pain.

Players can get rid of letters they can’t use by yelling “DUMP!” and returning the single tile back into the “bunch”, but they have to grab three tiles in its place.
I “DUMP” a lot.It always makes me feel better – clears everything out – gives me a fresh start.
The game is over when there is one less tile in the bunch than there are players in the game and any single player uses up all their tiles.
Once a player uses up all their tiles they yell “BANANAS!!!” and their tiles are reviewed by the other players. If any of their words are incorrect, the player reviewing them yells “ROTTEN BANANAS!” and all the tiles of the player in error go back into the main bunch for the remaining players to continue with the game.

Seriously fun, yet challenging, BANANAGRAMS has won its fair share of awards for being a valuable educational tool. 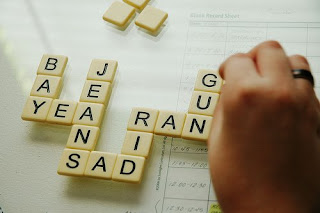 SIDENOTE: Though the BANANAGRAMS packaging is fun and rather nifty for traveling and storing, this same game can be played with any letter tiles, but if you want THIS game, and won’t be frequenting the “B” terminal in SLC’s airport, you can find it here at Amazon.